El Loco- "The Crazy One"

Having to park on Riley Street, I had to walk cautiously down the steep Foveaux Street with my high heels to get to El Loco (the entrance is on Bellevue Street, next to Excelsior Hotel). As soon as I arrived at El Loco, I can why the bar is named "the crazy one" in Spanish - it was packed with people with loud music with waiters bustling through the crowd carrying tacos and other food to customers on a large tray on their shoulders (true Mexican style?).


I went there because of their $5 tacos recommended in SMH's "Cheap Eats". When we were deciding what to order, I saw the reason for their cheap price - the tacos was the size of my palms (my palm is average girl sized, Candice's is smaller). I wanted the Al Pastor (spit roasted pork, pineapple salsa) tacos, but they sold out, so we end up getting the Corn Chips with guacamole and salsa, Empanadas and “Camaron” (prawn, salsa verde, pico de gallo), “Pollo” (chicken, sweet corn salsa) & lamb tacos (all $5 each). For drinks we ordered both classic and frozen margaritas.

All the tables were taken but we were lucky enough to find one spare chair to put our bags on (I went there with a few girls). Our food arrived shortly after a few sips of our margaritas and a waitress found us a few more chairs so we can put our food and drinks on.

The salsa for the corn chips was quite bland, but the guacamole was nice. The empanadas were hot (temperature-wise) so the cheese is melted just the way I like it and the jalapeños inside met my spicy craving. The accompanying sauce was flavorsome, so it became the dipping for our corn chips!

The tacos, there wasn’t much flavour into it and it was quite clumsy to eat especially if you’re standing up AND if you have a small mouth like me. Liquid from the salsa kept dripping out from the paper “container” so be careful if you’re wearing open toe shoes! If you really want tacos, I only recommend the lamb, which had a bit more Mexican taste than the prawn and chicken (it was one of the specials on the night I went, so it’s not on the online menu). Oh, almost forgot the alcohol, I like the frozen margarita better than the classic because it cooled me down from the heat inside the bar. 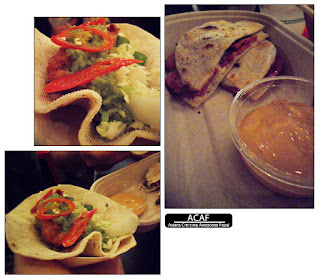 Overall, I would not recommend this bar for those who wants authentic Mexican food nor to those who wants to have deep conversations because the music was so loud that we had to practically shout to each other. But if you go, do try the empanadas!