My night with my Hong Kong friend Vivian and Momofuku started with refreshing the restaurant's reservation page on 12am on the dot 10 days prior the agreed night to secure our seats in the restaurant. Finally after waiting for 10 days, we arrive to Momofuku, where we were informed that wine pairing is available for an extra $95 with the $175 15 course tasting menu, but it was mostly white wine so we didn't get it. We end up getting a bottle of red.

We started off the night with shiiake chips, nori, mochi rice and tiny rolls filled with roasted potato puree. The mochi was flavoursome, we wished there was more on the plate! But then if there's more, it might have filled up our tummies with the glutinous flour. The shiitake chips were interesting, it's like tasting a piece of nori that tasted like mushroom. The nori and the roll however, was bland.

The second course was David Chang's famous pork belly in steamed bun with chilli sauce. Pork belly is one of the two cuts of pork that I love, and the pork melted in my mouth as I expected. The steam bun was nice and soft and it accompanied the pork perfectly with the cucumber and hoisin sauce.

Third course was kingfish with pomelo and pistachio. I don't know why pomelo was used on this dish because they were quite tasteless (maybe i'm used to the sweet pomelos that I have from Hong Kong) and the pistachio were chewy. 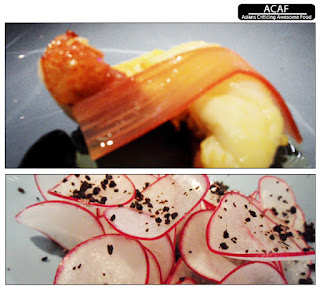 The disappointed course was followed by the lovely marron. The marron was freshly sweet, I wish there was more on my plate! This was followed by the picturesque but average tasting dish of diced wagyu covered with radish, this was the only beef dish of the 15 course tasting menu. 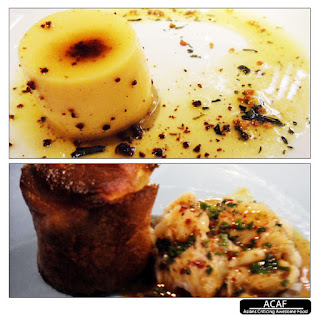 Then comes the spanner crab with yorkshire pudding. And my god, it was so nice.. i personally LOVE crabs but eating it by itself in its shell is too messy. The fluffy yorkshire pudding worked so well with the Australian famous crab.
Then followed by my favourite dish- slow cooked egg with green tea rice and chicken brown butter sauce. The egg was so smooth and I've always loved green tea rice which surprisingly went well with the chicken sauce. 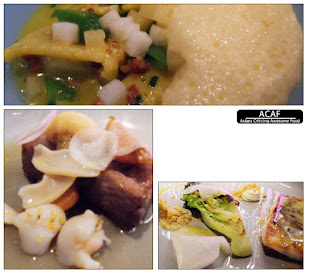 The ravioli with pea, Serrano ham, water chestnut and parmesan foam wasn't really my thing. The raviolis were delicious but there was too much foam for me, lucky it was separated from the raviolis. The next course was Mulloway, smoked roe and lettuce. This combination was a bit weird, but the sauce was really appetizing. The lettuce was quite difficult to eat.

The braised pork neck with turnips and stormshells (clams), didn't really appetize me because i'm used to eating pork neck grilled - thai style or chinese bbq pork. The braised pork had this smell that Vivian and I didn't find appealing. Then comes the petit fours, fluffy grated pecorino, honey licorice and bee pollen. As you can see from the pictures, there was a lot of cheese as compared with the honey, even though im a self-confessed cheese lover, the dish would be better with less cheese. Also, the presentation could be better.

After that was the pear with yoghurt, sultana miso and milk crumb. The matching of the different elements of the dish was amazing. Next was the malt ice cream with brown sugar, smoked butter caramel where the crunch brought the ice cream to another level.

Lastly, and the most unexpected dish of the course, pork shoulder with brown sugar which was ate with our fingers.. it was tender but we were way too full to fit more meat into our stomachs!

All in all, the whole 15 course was like going on a wonderful food roller coaster, thankfully there was more ups than downs. I wonder if I have told them that I'm not really a fan of pork, would they have changed some course for us ? But of course, keep the steamed pork belly bun :)