Restaurant: Bar H
Location: Surry Hills
Cuisine: Modern Chinese
Rating: 7.5/10 – Service and food was good, though it seemed like all dishes could have just been herbs ...

Browsing through my email, I was deleting all my subscriptions (or rather junk), and it just so happens that I came across spreets deal for Bar H. A dinner for two valued at $170 for only $79! Now, it would simply be silly to ignore such an email, and I instantly forwarded to my fellow girls. Sadly, Candice and Jess had declined, but Feli had accepted considering she had always wanted to try Bar H. I do also admit, it wasn’t only the price that lured me, the photo they attached was what really pulled me in. I was drooling, mentally!

I admit; it was a little annoying when we were trying to make a reservation. It was only available to be done via email, and there were a few emails exchanged in order to just set a time. There were a limited amount of times we were able to get due to using the voucher, but what do you expect for the price you pay.

Finally, our night had arrived and we were sitting inside the little cozy restaurant, I must say – I am glad we couldn’t get a table on the Friday night as it was smaller than I had imagined it to be. A Wednesday night dinner was just perfect to allow us a bit more space and attention. Feli and I both sat on the bench table, looking out to the quiet street of Surry Hills.

As we both couldn’t have duck, we asked our waiter whether we could change the duck broth to something else. Sadly, that was not available – but we were fine with that. Along with our voucher it also included a glass of wine – Feli had a glass of bubbles and I had a rosé. 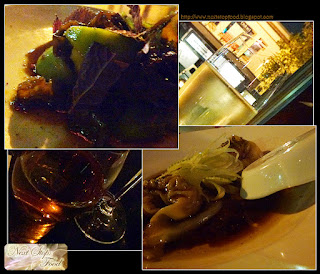 Then we were presented with the Pickled Cucumber Salad, it was refreshing. It was definitely a nice way to start the night off with a small salad. Not long, we were then served with the steamed pork wonton with shellfish oil, this was delicious – the pastry was soft. 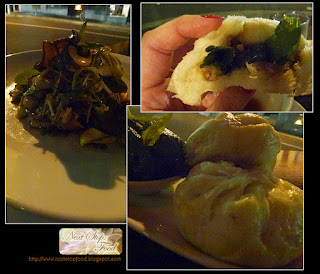 The first two dishes had come so fast that Feli and I both believed that we would be done with dinner in no time. It wasn’t a long wait, and then we were then met with our steamed pork bun. The waitress kindly explained to us that their pork buns were to be eaten with the herbs stuffed inside the buns as well. Breaking our bun in half, we put the herbs inside our bun and it offered a very uplifting feeling on the taste bud. Finishing my first half, I was curious to see what the bun would taste like without the herbs and indeed it seemed to lack a little BAM feeling – or it could be because I had already been invited with the enhancements the herbs offered.

Just as we finished our last bite, our next dish was placed in front of us, cuttlefish with fresh herb salad. Another herb salad, we seemed to be hit with a lot of herbs tonight, sadly – this dish was a little disappointing, as I felt like the cuttlefish was like squid and Feli had described the texture to be like mushroom. 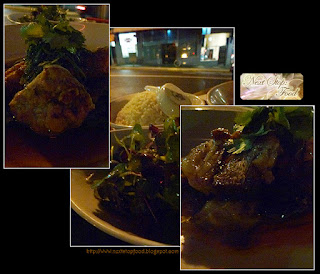 A little wait to break the entrées with the mains, and we were then presented with chicken with ginger and shallots, steamed rice and the herb salad. I had expected it to be a crispy skin chicken, like most other Chinese Restaurants. I was wrong, and I really should have expected it to be different as this was no Chinese Restaurant. The chicken pieces were deep fried, and I enjoyed this thoroughly – the balance of flavours was good. Usually, I’m not a fan of deep fried foods drizzled with sauce or soup already – but surprisingly the chicken was still crispy by the time it got to us.

Not long after, our last dish arrived – braised beef with Sichuan eggplant. As expected, the Sichuan wasn’t spicy. The beef was tender but we did believe that it could have been a tad spicier. Though, I guess as this was a set menu – not all people could take spicy and it had to accommodate to the majority.

We looked at the dessert menu and nothing caught our interest, so we opted to pass on dessert. It was an odd experience to walk out right after our meal without the need to ask for the bill.

Overall, our night at Bar H was not bad. For the price we paid, I believe we did get what we paid for. You can’t expect much when you pay $79 for a meal for two. If you’re in the area looking for a place to catch up over food and drinks, Bar H could just be your place to be. The ambience is comforting and the service was good. I’m sure the atmosphere on the weekend would be nice, a different nice.