A few months ago, I was looking to dine out with the family to celebrate the parents' birthday dinner in our local area. I came across Ten a few years back but never thought to go in cause it seemed overpriced and probably not the best for a Japanese sushi fix. But we finally decided to give Ten a go since the other Japanese restaurant in the area was booked out for the night.

I'm glad we went cause the food was so well-cooked and fresh. Their mixed sashimi platter was fresh and well presented that I almost forgot a sashimi platter could be so beautifully presented, since we're so used to the slabs of raw fish in the slightly cheaper sushi places/ sushi trains. You gotta love the Japanese for their dedication to appearance (: 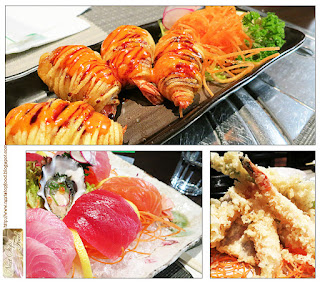 We ordered the potato prawn entree which can be ordered in 2 or 4 pieces. With the thin potato strings wrapping the prawn it felt like you were having ultra skinny fries without the oil and the fat! and still being able to eat a fat, juicy prawn which was wrapped in the middle with all the goodness of the 'fries' on the outside. It was such a winner, I just know we all secretly wanted one more to ourselves or was that just me :|

The mixed tempura was cooked to perfection, just look at that lightly golden colour- it almost looks like it's shining but looks healthy to indulge yourself in!! how does the Japanese do it!? how can they make something deep fried look so healthy !? 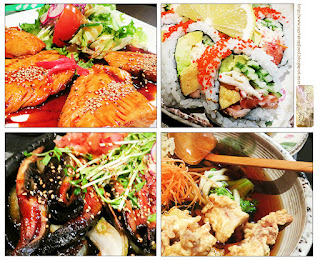 The teriyaki salmon had a tad too much sauce; kinda felt like my salmon was drenched but nevertheless the salmon was so well cooked - it just meant having more sauce = eat more rice? ....
I'm not sure if you have seen such a beautiful california sushi before but this sure made my evening. and with it being slightly over $1 per sushi (10 pieces) some may think it's slightly overpriced but it was definitely worth it as each piece was bigger than your average sushi piece and just look at the ingredients - it's just gushing out with goodness and the vibe of colours!

The chicken karage udon wasn't for me as I have a thing with deep fried food in soup. I just don't get how the fried item can still maintain it's fried-ness while being served in a soup? but with that said my brother was more than happy to have it all to himself.  The eel was slightly burnt compared to the other times I have had unagi and since this was the last dish to arrive we had difficulties finishing it: it could have been cause it came last or simply cause it was overcooked.
Overall, Ten Japanese is a place I would recommend for a night out in the local area when you want something other than your average sushi trains. It may look overpriced but for the quality and quantity of their food it could be overlooked. Just remember to order the potato prawn and you may want to consider ordering at least 2 for yourself! :p