The Winery: With some fairy floss on top

The only way to end a good meal is dessert no less. After looking at the dessert menu at Bar H, Feli and I had nothing that interested either of us or was it that – we had already both put expectations to go to the winery for their dessert?

We had been to the winery previously and tried their dessert and was blown away, simply because we had a complete different expectation to what was actually presented to us.

So, a walk up to the Winery from Bar H wasn’t that bad… or so we thought. It wouldn’t have been that bad really, but because Sydney had been in it’s bipolar state with the weather, we were greeted with some rain as we were walking over – but it will be worth it.

Sitting outside in the smokers’ area (as the wait would have been over half an hour), we ordered our dessert. 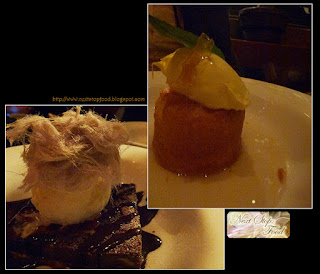 The zesty lemon pudding ($14.00) is simply divine! It is still warm when served to you, drizzled with the lemon sauce, balancing on top the pudding is a spoon of crème fresh – to help balance the sour flavour from the lemon. The pudding is not soft, but at the same time it’s not hard, just thinking about the pudding is making me salivate.

Feli had come back to The Winery after our first visit with Candice and some other of their friends and tried the double rich chocolate brownie ($14.00). So, they had mentioned how good it was, so there was no way I was going to slip a chance to try this! The brownie was delicious; there were pecan nuts in the brownie enough to break up the sweetness of the chocolate brownie. Sitting on top of the brownie was vanilla ice cream, and on top of that was twisted fairy floss. Now, this is the first time I’ve ever tried Persian Fairy Floss and I was simply amazed at the way it simply melted on the tip of your tongue. Yes, fairy floss does generally melt – but the lightness of this fairy floss blew my mind away.

I must also add, I am in love with the ambience of this place. I love the theme; the whole concept of the bar is something, which I can simply sit for hours on end with friends, whether it is enjoying their food or drinks. The atmosphere is great; don’t expect to be talking in whispers – as it can get pretty loud it is a bar after all.