We've been wanting to go to a Food Truck ever since they were approved by Sydney Council and FINALLY we went to Eat Art Truck after we watched Batman: The Dark Knight Rises (which was very good btw, Christian Bale’s lips were very sexy). The night we went, they were at Victoria Park opposite Symore Theatre near Sydney Uni.

Candice and I studied in USyd but both of us never entered Victoria Park before - it is actually quite a nice place to relax (we should have ate our lunches there during uni!)

We ordered the Pulled Pork Bun with mustard cabbage (spicy) $12 and chicken wings with shichimi pepper ($8) and settled near the playground area where there were chairs and table.


The spicy pulled pork bun was a die-for! The pork was tender and the sauce, even though it was spicy, it doesn't leave that fiery aftertaste in your throat. If you are not a fan of spicy food, order the bun with sweet sauce, which Candice said was delicious.

Reminiscing the flavour of the pork now makes me salivate. Pickled carrots were included with the bun and which helped to balance out the spiciness of the pork but Cassie didn't really like it because of the sourness so I ate her carrots on her behalf. 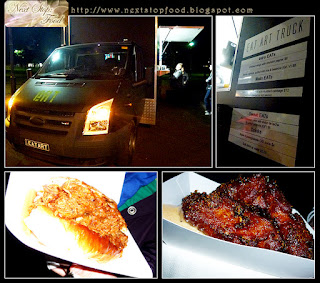 The chicken wings were mouthwateringly succulent with a hint of spiciness, if your tolerance for hotness is quite low (eg Candice), you might find it too spicy!

I'll definitely go back for the pulled pork bun because it has been part of my random cravings during my night uni classes and because they operate till 11pm, I'm pretty sure that one night I will go to fulfill my late night hunger!