Finally, after months of wanting to come and try this place – Candice, Feli and I found ourselves sitting here on a Friday evening.

Candice and I arrived first and were sitting waiting for Feli and Joanne, our stomachs growling from a hard day’s work. One of the kind staff, which we later found out his name was Andy, advised us that there was happy hour and listed all the drinks which were on the list. Deciding we could order a quick entrée and quickly demolish the dish before Feli and Joanne arrived, we ordered the Peak Kai Tod (Marinated chicken wings - $8.90). The wings were really tasty, the batter was nice and crunchy and the inside was succulent. 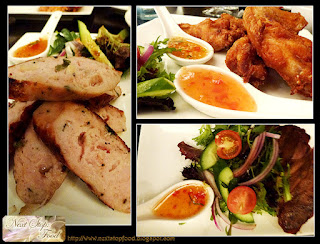 We had just finished our wings before Feli had arrived, perfect timing to hide our secret dish. Asking one of the waitress’ about the list of drinks that were for happy hour, she seemed confused and got us another. Then this waitress told us we cannot order happy hour drinks in their restaurant, though they had clear signs around noting to ask their staff if we wanted to order our drinks. Finally, we had the attention of Andy, and he had again, helped us with our drinks.

Upon knowing Joanne was looking for parking we had ordered our dishes. Though, after ordering Joanne told us there was a lot of traffic, so we asked the staff to hold on our dishes for about 15 minutes. 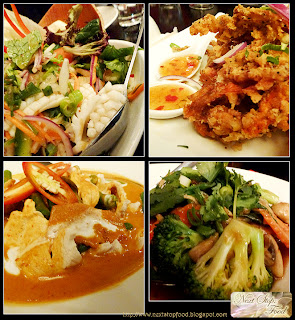 In 10 minutes, our mains arrived – Chicken Gang Panang (Pangang Curry - $12.90) this was nice, the curry was a little spicy but it was good with some rice. The Vegetable Pad KaPao (Chilli Basil & Garlic Sauce - $10.90) very tasty, I didn’t find this as spicy as the panag curry. Candice had told us the Soft Shell crab ($15.90) was a must order, as her friends had described it as the best. It was nice, but we wouldn’t say the best – it had enough crunch and the two choices of fish sauces were just enough to compliment the salt and pepper. Yum Pla Muk (Calamari Salad - $14.90) it was tangy and delicious!

It was bizarre that our dishes had arrived so soon despite asking to hold on the cooking, looking at our dishes we weren’t sure whether we should start or ask them to take our dishes back. Also, where were our entrées?

Asking the waitress, she told us she would check. Not long later they arrived. Ox tongue ($10.90) it was different from the ox tongue we are familiar with though it reminded us of something we’ve had before. Feli then announces “beef jerky!” and instantly I taste it also. Laos Sausages ($10.90) were yummy, but I guess they’re just sausages really.

Joanne then called and said she wasn’t going to join us because she could not find parking, Sydney and their horribly expensive and limited parking. We had a lot of food. Thanks to social media, namely facebook – the main reason why we had wanted to come try Holy Basil is because of their infamous deep fried ice cream ($13.90). Feli and I had decided we would have one each before we ordered our dishes, and Candice looked at us like we were crazy – because apparently it’s big. But every time we have fried ice cream, it’s always one each! But due to eating so much food, we had agreed to share. Which we are actually glad we did, not only because we were so full – but because our first spoon was “is that it?” I’m still not sure if it’s because of social media making it seem like it was simply the most delicious thing ever making our expectations fly sky high, or it really isn’t that great. I admit, Feli and I do have pretty high expectations on fried ice cream – but this was nothing special. The fried ice cream we’re familiar with is usually wrapped with cake, however this was wrapped in pastry – it was different. The caramel sauce was nice.

As Candice had been here two nights ago for her first time, she decided to order the Black Harbor ($13.90) this is black sticky rice with ice cream. Andy had told us there were fruits as well, though the “fruits” we got was the one strawberry sitting on top of our ice cream. Now, this was nice – again, maybe because social media had not gotten around for this dessert. We were simply impressed with the sticky-ness of the black rice; the ice cream was enough to help break out the sweetness from the caramel and rice.

We were glad that there was at least one dessert we felt impressed with. We still don’t understand the big hype over the deep fried ice cream; please share your insight as to why you love it so – if you do.