First off, this post is so overdue it’s not even funny! We just keep eating and eating and the build up seems to just keep growing and growing… Must learn time management, maybe it’s time to put a stop on eating until we post up to date! Haha, though it is particularly my fault for all the delay …

Anyways so … Candice and I were going through the Sunday Morning Herald early September when the October Crave Festival brochure was out. We both skimmed through the pages and drooled mentally at all the food descriptions on offer. However, realistically we knew our wallets would not be able to survive this.

Then we came upon reading what was offered at Hyde Park Barracks Café and we were both already, this is the one! That’s when the organising started …

Being excited Candice had come across the-hungry girl’s post in 2010 – and the food seemed similar to what we were going to eat.

So, our Saturday “brunch” (I quote it because our booking was at 1.30pm, and we didn’t eat until after 2pm due to me…again!) was finally here! Having not eaten, as the past review seemed to be really full from the food offered, it was best to go with an empty stomach.

We were offered a tea or coffee each as this was part of our $25 meal. Not being much of a coffee drinker, I chose a green tea. 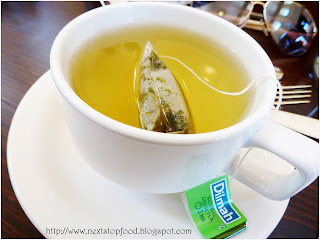 “It tastes funny…” Feli muttered to me, “Don’t you think so?” Another sip, and I contemplated, not sure what she meant by funny. Only after her constant comments on her weird tasting green tea, and a mention that mine was Dilmah did it occur to us that hers was a completely different brand of tea. We exchanged teas to taste what the other tasted like, and indeed hers had a weird taste – it was not entirely green tea. (how can one explain green tea not being green tea?)

Tummies were grumbling to each other as we talked to one another. Food were sweeping past us, as our heads turned to follow – there was obviously a very popular dish which Feli and I were very curious about but never asked the waitress about sadly.

My eyes lit up as I saw plates come out from the kitchen before me, it looked like something I’ve seen before! My tummy was making more noises just to respond to what I’ve seen.

Three petite little precious assortments lay on a long plate. Despite the many retaliations of the stomach, photos were definitely mandatory! 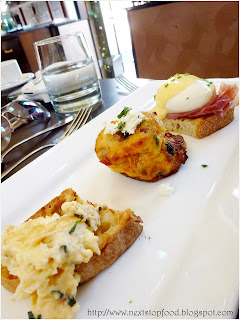 Eggs three ways:
- Tomato and scrambled eggs bruschetta
- Chorizo Spanish Omelette with fetta and fresh herbs
- Eggs Benedict with prosciutto and chive hollandaise
The tomato and scrambled eggs was delicious, the eggs were fluffy however I think there could have been a little more tomato. The brushetta offered the nice crunch with the eggs, yum!

Chorizo Spanish omelette with fetta and fresh herbs was morish! How I wish I could have had more as I ate. Or maybe that was my stomach talking …

The Eggs Benedict was perfect to end with. I probably wouldn’t have minded a tad more hollandaise sauce, the tangy sauce simply complimented the prosciutto perfectly. I would have been happy with another serving, thanks! J

Having been fed, the stomach was calling for more food, but just a little wait and we were presented with empty plates before us. A little confused, as the first course was served per person. 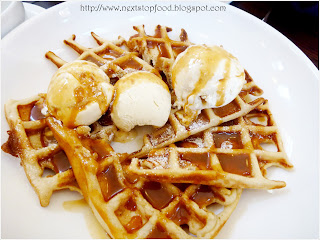 A plate was placed in the middle with our waffles; indeed it was set for sharing. But it was divided enough per person. We split the waffles evenly between us all. The caramel was asking me to keep scraping for more, but sadly as it was placed in a plate to be shared the sauce was hard to share between others as it’s always the whole “wipe the plate with the waffle” and that didn’t seem appropriate on a plate that did not belong to ourselves. I would have liked the waffle to be slightly crunchier as it seemed to resemble a pancake shaped as a waffle. Regardless, it was still very delicious.

But … that was our meal. Sadly, as I had read how full the-hungrygirl was – Feli and I was left feeling disappointed as we were far from that. It could have been because she did have an extra course, which may have been filling.

So, tell us … have you ever been somewhere and expected more from it – only to be left with a different experience?
I’m not saying this was a bad experience, I guess we just worked ourselves up for it more than we should have? The food and service was impeccable, we just wanted more food haha.