It was my sister's birthday and she chose to have her favourite cuisine - Italian. So I searched for Italian restaurants in Surry Hills and Il Baretto caught my eye.  I love Surry Hills because there is an immense variety of cuisine and there’s parking friendly everywhere!

We arrived to the restaurant early at around 6:30pm as they have a no booking policies. The restaurant is situated on the quieter part of Bourke Street, with the only eateries being Il Baretto and Carrington Hotel opposite it. 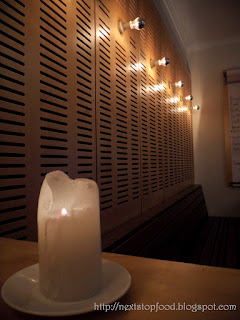 As there are only 2 wines to choose from, we chose the red which was Merlot and Cabernet $20. If you like a specific type of wine, I suggest you BYO, with corkage being $3 per person.  The ambiance is nice with candles giving out a romantic vibe.


The very thinly sliced beef was fresh, however, there was not much dressing. Though I particularly liked the addition of rocket with the beef.


I am a self confessed Mushroom Loving Queen, so usually when I spot a dish with mushrooms, I'll suggest to order it! Somehow every time I order risotto, it lacks flavour and unfortunately this is also the case in Il Baretto. The rice itself was cooked well, it just needed a bit more salt and cheese.


This dish screamed "CHEESE LOVERS ALERT!!". The flavours of the gorgonzola was amazingly mouth-watering and it suited the palate of cheese lovers like my sister and myself. However, my mum (not a big cheese fan) did not enjoy it and barely touched it - which meant there was more for us YAY! The gnocchi were nice and not too floury.

Luckily we were sharing the dishes, or else I'll end up going home with cheese breath!


I loved the texture of the fettuccine, however, I could not taste the chilli in their sauce. But the sauce itself was tasty.

The pork belly was perfectly cooked with the fat melting in my mouth and the meat was succulent. The ribs were a disappointment though as it was to the dry side. The roasted potatoes were delicious, we wished we can order it as a side! The sweet and sour balsamic apple helped to bind all the elements of the dish together. As my taste buds loves sour, I could eat that on its own.


The liqueur used in the tiramisu made it more-ish but the texture of the mascarpone was too runny for my liking, it was almost like cream..


The texture of the panna cotta was flawless, and so was the sauce. I could not think of a better way to end our dinner!

The staff throughout dinner were attentive and friendly. I like this restaurant, the food and the ambiences and will definitely come back! I also highly recommend the gorgonzola gnocchi (especially if you're a cheese lover) and their pork ribs dish on their Special Menu - I'm still mesmerising about the pork belly. I also want to try their lasagne as a lot of people seemed to be ordering it. Also, due to their no booking policy, if you don't want to wait for too long, do arrive early. We left at around 8:30, and there was a queue even on a rainy Tuesday night.

Are you a cheese lover like me? Where have you fell in love with a cheese incorporated dish?