Location: 155 Victoria St, Potts Point
Aren’t we all feeling a little Merry lately? Christmas time is near, Christmas parties are happening!! What other way is Christmas celebrated other than eating? 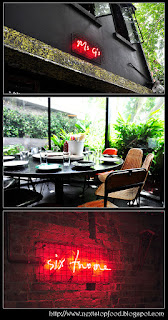 Thanks to our beloved Candice for organising our forever changing numbers for our lunch. So, the day came and we had a lovely gathering of twelve people! As we were previously advised any parties over ten, we would have to have split tables – but thankfully we were all seated together.
The staff were amazing, helpful and friendly. At one point, we did spot that a fork was … dirty (that’s an under statement), but our waiter had kindly changed our whole carton of cutlery. 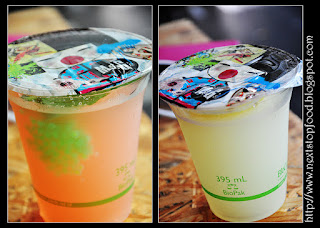 To start: drinks!! Cocktail Slushee’s, what a perfect drink to have on such a hot summer’s day! The G’n & T’d Slushee was refreshing; it was nice and sweet. The little green little pearls were … weird. They didn’t really have a particular taste, but at the same time it was funny to have it flowing in your mouth with the sweet concoction. I was told Ms G’s Famous Yuzu Slushee was rather sour.
As we had a party over 8, we were advised we would have to have the banquet menu $60.00 pp. Also a 10% service charge. 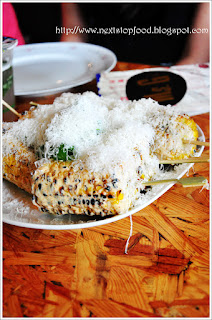 Ms. G's grilled corn on the cob, with parmesan and lime

FOOD, oh so glorious food!! Hello corn, hello supposed healthy food smothered in chilli aioli and shaved Parmesan cheese. But oh-sweet-goodness, it was so tasty. Being “girls” we all cut down all our little corn bubbles rather than eat it off the cob, and then silence engulfed us all. 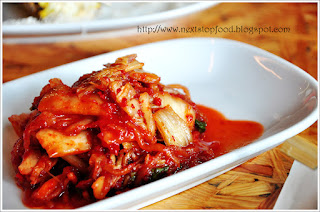 Next came the kimchi, I must say it really wasn’t anything different from your usual kimchi you get served from your average Korean joint. But hello “massive” size! Haha compared to your usual little side dish, this was a nice plateful. It may have been a little spicy to some of our friends, as I too had found it rather spicy after a few picks – but perfect. 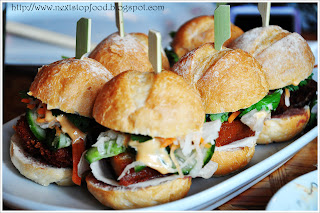 OHH MY, HELLO little buns of goodness! Something we were all “secretly” waiting for! As everyone had voiced they wanted the pork belly, and that we did get half and half – I opted for the chicken. The crunch in the chicken was absolutely to die for; I don’t think a Vietnamese pork roll will ever be the same again. It has a lot to live up to now. 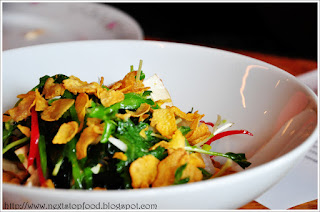 “Is that cornflakes?”
“How interesting”
“Who would have thought to add cornflakes into a salad?”
Curious statements and questions were exchanged over our end of the table, “How is it?” Not that I feared to try it, I just like to know what to expect – so my question was rather mandatory. It was absolutely awesome!! It was light and moreish at the same time. Everyone made sure that they had at least one little piece of corn flake in their helping each time they went in for more ... or was that just me? Lalalala~ 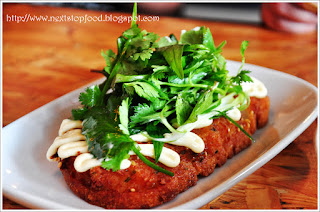 Sweet holy goodness, this may have to be one of this biggest highlight over lunch. The prawn toast with yuzu aioli ... not your average prawn toast with sweet and sour sauce.  It was so crunchy!! I do believe I heard the waitress say it was on sour dough, or was that my mere imagination as my eyes was already making my head go into a spin of drool when I saw her placing it on our table? The coriander just gave the whole thing that one last BANG and the flavours will simply explode in your mouth. 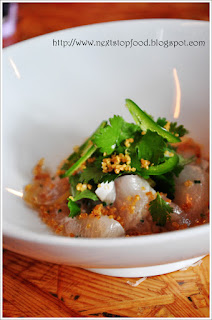 Mmm ... the kingfish was light, and refreshing. I’ve never had quinoa before – heard it plenty of times but never tried. So, I was expecting a soft like texture, but was surprised with the little pop of a crunch once I bit into it.

A break time! So, Candice organised for the boys to have their share of the fun and exchange their Kris Kringles. Some interesting, fun, exciting, sweet gifts were exchanged. 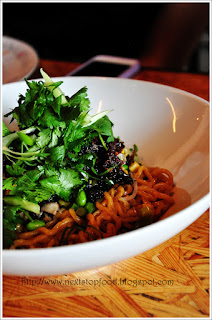 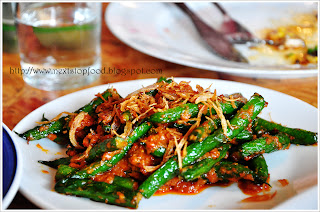 I had a piece of bean and found it lacking shrimp paste in the sambal. Feli had a piece and told me it was really salty. Keep trying more and still found it tastelss and realised much later ... I didn’t really have a piece that had “sambal” sauce stuck on it. But yes, the sambal was rather salty. 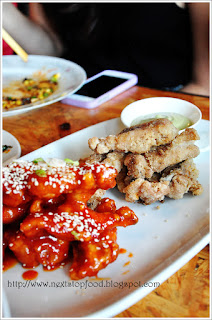 CHICKEN! FRIED CHICKEN! We are always up for protein goodness, and never a no for it to be unhealthily deep fried also. It wasn’t too crunchy, I’m not sure about the others but I found the “Naked” chicken a little too salty. I much preferred the “spicy Korean” chicken more – however, compared to their other spicy dishes namely the kimchi, it wasn’t very spicy. It was more like a sweet and sour like chicken. Still made me a happy girl regardless.

BREAK TIME, is it present time?! YAYAYAYYAAYA!! I was hoping to dig into my present until Candice pointed out we need photos, and I realised – oh right, I’m the so-called photographer. But many thanks to everyone for being so cooperative and getting gifts! Thank you to my Kris Kringle J 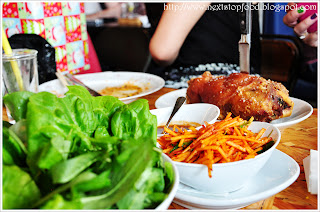 I thought it was dessert time, but no Cassie – you thought wrong! By now, we were all rather full. But OMG HELLO PORK HOCK!! Hello crispy skin goodness!! No one was willing to serve the pork hock, and so ... it was given to me again to do the honours. OH SWEET JEEBUS (Happy Birthday?) ... shredding into the pork, the pork simply slid apart as the knife had cut into it, “IT’S GOING TO BE SO NICE AND TENDER!!” I think I kept repeating to the girls as I kept tearing to pieces, “did you hear that crunch!?” How can one be so excited with food when full and cutting up meat?! May god bless me! HAHAHA! 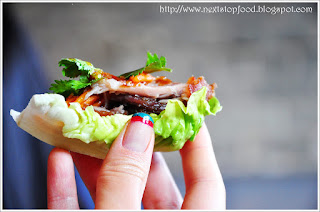 And yes, it was simply delicious, wrapping it up like a san choy bao with the pink lady apple kimchi, herbs and sauce was simply amazing. The meat was as tender as I imagined and the crunch was just the icing on top! Yes we were really full, but our side of the table finished our serve and looked at the dish next to us with the pork skin just sitting there. What a waste, we shall sacrifice ourselves and ... finish it off? It was a big sacrifice to make for four girls who were already really full.

So, having looked at the menu previously, I had decided automatically which the winning dessert was. Of course it would be the stoners delight – like DUH! It had all the goodness in one, sif it wouldn’t be the winning dish over the boring passionfruit custard with chocolate and coconut.
“It sounds like you have a load of left overs put on a plate to make a dessert though...” One of our girls said. True, point taken. But still, sif it wouldn’t be good, it’s all the gooooood “left overs” :D 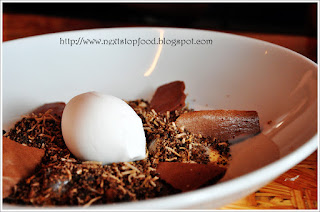 So, a spoon full of the “dirty passion” went into my mouth and I was simply taken into another world momentarily. It sounded so plain and simple, but every element on that dish complimented each other so well, it was so refreshing. As advised by the waitress, everything on the plate was scooped into a spoon to have altogether, and you will be taken into heaven. 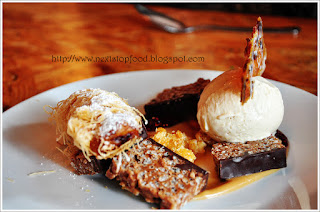 Stoners delight, where to start. As it was stated, there were so many elements on the dish. The candied bacon strip, we broke into four pieces, seems like we were the lucky ones with a long strip as when we told Candice we shared it between for – she gave us a funny look. Then we realised theirs was too small to even split in half! I’ve never tried sweet bacon (though it seems to be the new thing lately to have bacon in everything!), it was interesting – the first few bites all I could taste was the sweet candy, give it a bit of time and the subtle saltiness of bacon will blend right in. Interesting indeed.

The banana fritter was crispy on the outside and simply melted with gooey banana innards, mmm~ The little pieces (we guessed was potato chips) were ... a little confusing, as there wasn’t much taste to it. I wasn’t sure whether I liked it or not. The mars bars slice was nice and chewy, probably lacked a little mars bar hit though. The cinnamon flavoured doughnut ice cream, this ... I’m also unsure whether I liked it or not. I found the ice cream dominating with cinnamon, and not so much doughnut. More like a cinnamon ice cream perhaps?
I admit defeat; the dirty passion was indeed the better dessert after all. I should have known better than to “judge a book by its cover”.

It was a pleasant afternoon, with great company, delicious food and disgusting hot weather. I’m not a fan of Summer.
Have you ever jumped to conclusions with your food only to find it gave you the opposite effect and left you either disappointed or surprised?
Last but not least, Merry Christmas to you all, but remember to stay safe!
- Cass x