Being subscribed to Merivale, I was over the moon when received the "invitation" to the Launch of March into Merivale 2013 via email. It sounded like the perfect TUESDAY (the day that Candice dislikes the most) night out and also a chance for us girls to catch up after our holidays. It was not too expensive either, for $33 (+bf) you get 8 tokens + 1 free drink from Paling's. 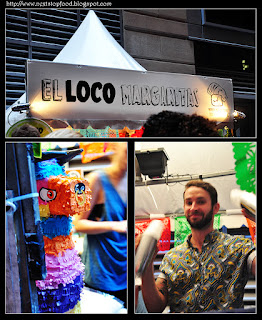 We started our night by of course an El Loco Margarita! It seemed to be a strong drink when we first had a sip, but it went down smoothly afterwards. Luckily there were tables everywhere for us to put down the drinks while we ate and there were waiters constantly clearing the tables.

Right next to the El Loco Margaritas store was the smell of barbequed meat which made our stomach growl for food. The steak sandwich was hot and juicy - Candice and Cassie finished it in no time! I had the barbeque pork sandwich, which was disappointing comparing to theirs as it was basically a cold ham sandwich.

We also tried their pork which was packed with lovely smoky barbequed flavour as well as being succulent!

Being a lamb lover, my eyes lit up when I saw Felix's dish! Of course this lamb shoulder was up to Felix's standards, it was flawlessly tender and flavoursome, I wouldn't mind having some right now!

We headed back to the first store of the ground floor - Abojo, which is Merivale's soon to open Latin American restaurant. The smell of freshly grilled corn attracted most people and of course we were tempted by it too! Their combination of sauce, spices and cheese were fantastic but it was quite messy to eat, I think I had sauce around my mouth and some on my cheeks afterwards. None of us used the lime as the flavours were perfect already. I think this corn is a terrific dish to introduce Abojo - can't wait to try the restaurant when it opens!

After trying out all the food from downstairs, we headed upstairs to Ivy where Jess and I thought about the times we came here for clubbing.. it's been awhile..

As soon as we arrived upstairs, we were greeted by the long El Loco queue! At first we were going to share the quesadilla, but it turned out that Harbin and Seoul hasn't trained Candice's tolerance of spiciness enough - the jalapeño was too much for her so I had to finish this myself. The jalapeño and their sauce married each other ideally and the mushrooms were really fresh.

We are guessing the meat inside this secret nice and soft taco is beef. The sauce was nice and tangy with a touch of spice. We agreed that we will definitely eat this again, perhaps a trip to El Loco soon?? :D

When we saw the words "pork belly", our eyes lit up and Cassie and I went straight towards the store to get it. It was crispy and delicious, but comparing to the size of the other food we had, the portion was not generous.

Their dishes were recommended by an uni friend who we bumped into while waiting for the queue for Lorraine's Patisserie (unfortunately we did not take pictures of their profiteroles because we er.. gobbled it down as soon as we got them).

The battered fish in the fish & chips was hot and beautifully light. The poached salmon melted in our mouth and we love the mustardy salad.

Even though we were quite full already, we ventured to Ivy's Ballroom where there were live music and singers. The first dish we saw was this and for the love of Foie Gras, we knew we had to try it! The cigar was thin and every element were impeccable!

Last but not least, dessert time! I liked it how the dark chocolate biscuit was not overly sweet which complemented the apricots well - can't think of a better way to end our splendid evening!

We highly recommend this event, in fact, I wish Sydney has more of these kind of events. We will definitely attend next year too, will you ? :)