So the discussion about Matt Moran’s Chiswick started with how you actually pronounce the restaurant’s name, is it Chi-zick (how the English pronounce it) or Chis-wick (how people who lives in Sydney’s Chiswick says it). The conclusion was Chi-zick because Pommies’ are sexier! After our little discussion and checking out their menu, my friend decided to come here for her boy’s surprise birthday dinner.

I arrived to Chiswick gobsmacked by the beautiful surrounding, if I didn’t know the restaurant, I would have thought it’s a garden or park.

We were seated near their garden where they grow their own produce. Our tastebuds couldn’t wait to try their fresh food just by looking at their garden. 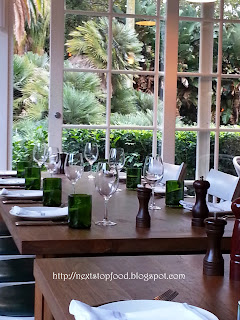 They have cleverly used glass window to fully utilise the surreal scenery outside, it was as if we were eating inside a glasshouse.

Because we had 9 people, we decided to order the group sharing menu $75 so we could try everything out. Unfortunately, I was not able to take pictures of all the food :(

When the flat bread arrived, the lovely aroma of rosemary hits my nose. The amount of salt on the bread was just right, just from this dish we knew our dinner would be terrific.

My friends described as flavoursome (I didn’t try it because my stomach doesn’t react well with capsicums). We were also served with Char grilled carrots, smoked almonds, cumin and lemon, this dish was mouth watering. There were a mixture of purple and orange carrots, both were sweet and fresh (perhaps it’s from their garden?) and the cumin & lemon complemented the carrots perfectly.

Everyone on the table loved this dish! The salmon was beautifully cured and the beetroot were appetizing – I might try to cure salmon with beetroot next time.This was served with Heirloom tomatoes, herbs, balsamic, someone on our table said the tomatoes were from their garden and it was amazingly sweet and juicy, you can really taste the difference between the ones bought from stores and Chiswick’s. The balsamic dressing combined with the lovely tomatoes stimulated by my appetite and I couldn’t wait for more food to come out!

The pasta on these little babies was silky and thin but the snow crab filling was on the salty side and I couldn’t really taste any crab. The tomatoes together with the sauce helped a little bit to cut the saltiness.

This dish was the highlight for some of us, the chicken was tender, moist and beautifully cooked. The lettuce absorbed all the beautiful juices from the chicken. This came with the Steamed broccoli, garlic, chilli, which were nicely cooked.

If you watched Masterchef last season, you would know that Matt Moran’s family owns a lamb farm and of course their lamb is used in Chiswick. This dish is MY favourite of the night. The meat just falls off the bone as we TOUCHED it, you can actually just use a fork to pull the meat apart from the bone. Needless to say, the flavours of the lamb was incredible and I will definitely come back for this dish (and the tomatoes too).

Another main course was the Fish and prawn tagine, saffron cous cous. I’m not a really big fan of cous cous, and this certainly wasn’t my dish. The cous cous lacked flavour but the fish and prawns in the tagine were tasty.

So.. after the mains, of course we’ll have desserts. This is when we had a bit of hiccup with the staff in Chiswick. We had previously called and asked if we could bring a cake to the restaurant and was told that we could but we weren’t told about the cakeage that they charged. At arrival, when we gave the cake to the staff, again, we were not told about the cakeage. After the mains, we asked the maitre d’ for the cake and FINALLY we were informed about the $10 PER PERSON cakeage (this costs more than our Messina cake). He explained that this was because they make their own cakes and we could have ordered from them, which whoever picked up the phone that day forgotten to tell us.

After a few minutes of discussion where he insisted to charge $10 per person if we want to eat the cake, he found out that we ordered the Group Sharing Menu and then everything just falls into place. He was willing to serve the cake to us without a charge. So basically, he had to ensure that we will have their dessert instead of just having ours which I think was a bit ridiculous, he should have stuck to his “principle” of charging a cakeage, he just made the restaurant sound like a place to suck people’s money.

Love the cherries in the black forest slice! The flavour of the dessert on the whole was average though. The other dessert was the Mango & vanilla bombe alaska, which was described to be pleasant, but they had better ones before.

Overall, I love the surroundings of the restaurant, it was like we were eating in a private garden dinner party. The fresh produce makes a big difference in the flavours of the dish. I probably would come back and if it is for a birthday party, I would warn them not to bring a cake!


So.. have you been to any restaurants with absurd cakeage?!