To be honest, I’ve never heard about this restaurant, I just know about the Google building that it is situated in which is opposite The Star Casino. My sister discovered this restaurant through Scoopon – they had a $49 voucher which gave us $100 spending money, pretty good deal! 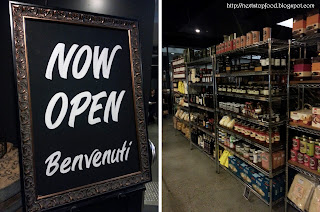 We were slightly confused when we were at the industrial interior design feel-like entrance where it was like a shop with racks of gourmet products for purchasing. Then a waiter came to greet us and wiped the puzzled looks on our face away. As we walked to our outside table, we saw the massive pizza oven, the aroma coming out of it was just sensational, but even though our stomach loudly protested, our brains decided not to have pizza because it's too filling. 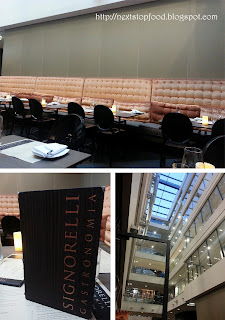 We had our dinner at around 7 and the sunlight flowed through the glass windows - I’m going to miss daylight saving so much!

First thing my sister asked when the waiter gave us the bread was “what are those black things!?” “I believe it’s salt?” I answered. So she curiously tried what it was then she made a face and said “yup.. it’s salt alright, I shouldn’t have tried so much!”

LOVE LOVE LOVE warm olives, I think the warmth enhances the taste of the olives, though I can’t really taste the chilli that was supposed to be in it. I used the delicious olive oil from this dish for the dipping of our bread – the fennel seeds gave it an extra taste.

Little fact: When Italians calls someone a Baccala, it means that they’re stupid. I THINK the Japanese got their word “baka” (which also means stupid) from the Italians.

Anyways, baccala is salted cod and it was beautifully wrapped in the silky smooth pasta. The prawns were perfectly cooked, the combination of everything on this dish was more-ish, we wanted to order seconds!

The roasted pumpkin was sweet and the goats cheese complimented it well with a touch of saltiness.

This is the dish I’ll come back for! The bug was flawlessly cooked, I just had to use a fork and with a light pull, the meat was cleanly separated from the shell. The scallops were cooked to perfection too, too bad there were only 3 scallops to share.

In conclusion, I would come here again without a voucher and of course try their pizza. The service was terrific, even though they knew we had a coupon. The ambience was nice and along with the fantastic food quality, it was definitely a gastronomic (as the restaurant’s name suggested) dining experience! Maybe I should start looking for jobs in Google because they've got this restaurant in their building and also variety of food in The Star...