As soon as Jetstar sent me their Special Deals email (this was last year), first destination I looked at was of course Melbourne! After purchasing tickets, the list of “Melbourne cafes/restaurants we must visit” begins.. Vue De Monde was the top of my list, thanks to a friend’s high praise of the quality of food.

Closer towards the date of our Melbourne visit, I checked out Vue de Monde’s menu, which indicated that it was mandatory to order the $220 degustation menu when dining on a Saturday night. There goes our visit to Vue de Monde! We were all quite pov from our Christmas/NY holidays. To still get a taste of Shannon Brennan’s food, we decided to opt for his less dear restaurant – Bistro Vue. 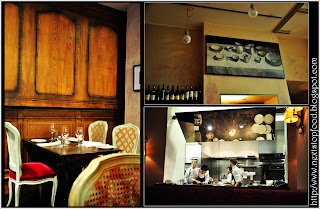 Their decor was very retro and it feels like we were at French home! But, I don’t think their air con was working and it was a really hot day in Melbourne.. Thankfully, after sitting there for awhile, we cooled down a bit.

But I’m guessing there’s an accumulation of dusts in the velvet sofa that we sat on, because it gave me a severe hayfever (ITCHY NOSE) throughout the night.

As soon as I saw this on their menu, for my love of foie gras, I knew I had to order it! This dish was smaller than I expected and I couldn’t really taste the buttery brioche at all as there was so little of it.


To be honest, this dish wasn’t too exciting, the flavours didn’t really jump out on my tongue. The crispiness of the soft shell crab was nice though.


The snapper was cooked nicely but it lacked flavour, I had to keep adding salt on it. The fennel was nice because it soaked up the anchovy butter.


The girls loved the wagyu, it was tenderly cooked to perfection. The béarnaise was flavoursome and thick as compared to the sauce Diane and pepper which were runny like water.

Loved the beautiful combination of the goats curd and tomato salad! The acidity from the tomatoes stimulated my appetite. The ingredients in the Waldorf salad were fresh, but the flavours were average.

The chocolate poured into the soufflé were amazingly rich and the soufflé itself was fluffy and light!

This was not overly sweet, but again, like a few of the other dishes we had that evening, it was mediocre.

We had told the waiters that this was Cassie’s birthday dinner, so they gave us a plate with “Happy Birthday!” chocolate writing with mini cakes. As we were taking a picture of the plate, we said hello to an ANT crawling on the plate. The waiter was rather annoyed and not apologetic when we gave him back the plate.

Overall, the food was average and the service in Bistro Vue was quite bad. The waiters were not attentive, as we were paying our bill with a credit card, the waitress actually took away the pen as she gave us the bill for signature. We spent 5 minutes waiting for a pen so we could leave. Don’t think I will be spending money in Bistro Vue again.